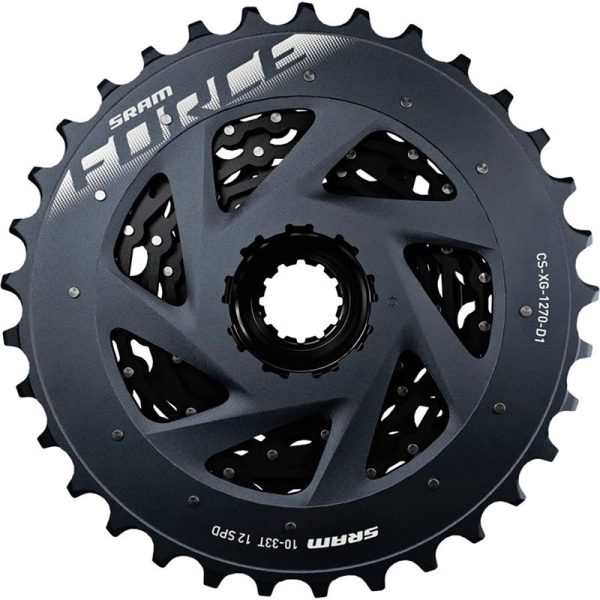 With the move to SRAM’s 12-speed road group, the need for a cassette with an extra cog is a given, however, SRAM took it upon itself to completely rethink gear ratios altogether. Thanks to its 10-tooth starting cog, borrowed from its mountain bike technology and afforded by its use of an XDR driver body, the Force XG-1270 12-Speed Cassette provides newer, wider gearing ranges for the modern road, gravel, and cyclocross rider.

Like its Red XG-1290 cassette, SRAM claims 1270 is specifically designed for electronic derailleurs offering smoother and faster shifting. Where it differs is in its use of pinned cogs versus a fully machined cluster where it gains some grams but is significantly less expensive. It’s Mini Cluster construction of steel reduces weight and increases durability and offers a longer lifespan when compared to cogs made of titanium or aluminum. It’s only compatible with wheels using an XDR freehub driver, however, many companies already offer the driver so there’s a good chance all your wheel needs is a simple freehub swap.

What we have really come to enjoy with the XG-1270 12-Speed Cassette is its ability to offer a more gradual gear progression between the cogs thanks to SRAM’s X-Range technology. All 3-gearing options use the smallest possible jumps with at least five one-tooth increments for smoother shifting and a steadier cadence. When used with a 1x chainring or close-ratio (13-tooth jump) 2x chainring, it’s always easy to find just the right gear.

There are no reviews yet.

We greatly appreciate your understanding and support during this time. Our team is committed to providing you support and peace of mind & body health. - Keep Riding Dismiss